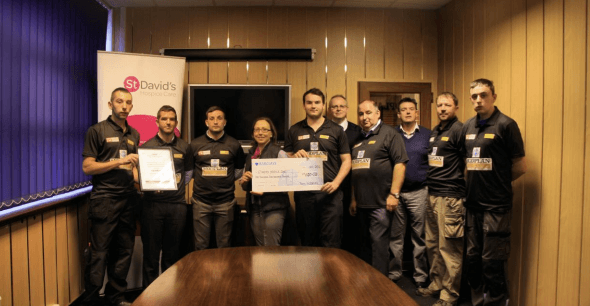 Even on paper, the challenge sounds daunting: climb the three highest peaks in Wales – Mount Snowdon, Cadair Idris and Pen-y-Fan in a single day. And the statistics show just how daunting it was. It was the equivalent of going up and down the Eiffel Tower 6.5 times (or up 3,200 windows!) – a total of 6,500 feet. It involved 100,000 footsteps at an average gradient of 1:15. Each member of the team burned 6,000 calories, so it was hardly surprising that they consumed between 50 and 70 bottles of Lucozade and countless Mars bars between them! The challenge took 15 hours from start to finish.

Brian Edwards said, “It was an exhausting day, but to be doing it to raise money for such a worthwhile charity made it all worthwhile – thank you to everyone who sponsored us, your donation will be going to a very worthy cause. I should also say a particular thank you to Modplan who donated the hire of the minibus, VEKA UK and SFS Intec for contributing to the cost of fuel, and Total Workwear for the T shirts we wore.”

St. David’s Hospice Care has grown to become the UK’s largest provider of hospice at home care, caring for over 2,600 patients and families every year.

It works alongside patients and hopes to support them at the most difficult times of their lives. It aims to ensure that patients have choice about the care they receive and helping them to maintain dignity throughout their journey is paramount to the charity. It also helps family members by offering support and advice, taking away the uncertainty and fears that loved ones have to cope with.