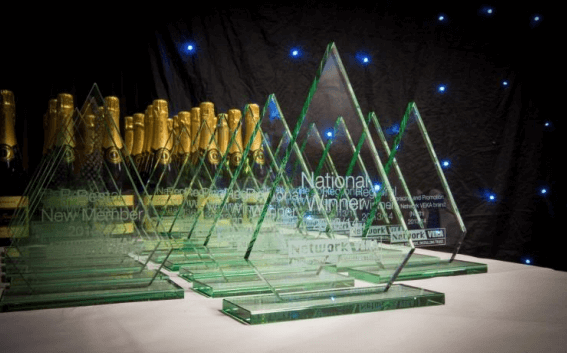 Several of Modplan’s customers have reason to celebrate having picked up various awards at Network VEKA’s gala dinner and awards ceremony. Held at Eastwood Hall, Nottingham the annual event, hosted by Brand Ambassador Steve Davis, gives recognition to Network VEKA installers who are considered the best in class.

Rugby Double Glazing won the award for ‘Embracing and promotion of the Network VEKA Brand’. The company had consistently embraced the Network VEKA brand investment package and has seen their business grow by an impressive 25%.

For the first time in the history of the Network VEKA awards there was nothing to separate two companies in the category ‘Regional awards for customer satisfaction’ (Wales). The winners were Ffenestri Kevin Thomas and MPN Windows. To make it a trio for Modplan in this category, Lewington and Son picked up the award for the Central England area.

Commenting on the success of the awards, Modplan’s Managing Director, Heidi Sachs said, “We are obviously delighted that so many of our customers picked up awards at this fabulous event. It really is recognition to the commitment and energy they put into their businesses. Special mention must be given to Ffenestri Kevin Thomas who was one of only a few companies to achieve 100% club status. This means his customer satisfaction results were consistently 100% which is an amazing achievement. It just shows how everyone in the team works to ensure they offer customer quality in every area.”

All of the current winners have been regular finalists and have previously won Network VEKA awards in the past. MPN Windows, Rugby Double Glazing and Lewington and Son all won the ‘Best Newcomer’ award in their first year of being in the Network, whilst MPN Windows have won the Regional Award for Wales for the previous two years.

Membership of Network VEKA gives customer evidence of the commitment to quality – and judging by the awards picked up by Modplan’s customers, that commitment is something that customers really value!